Willis and his brother Leroy always enjoyed listening to auctioneers when they were growing up.  One of the highlights of growing up on the farm was going to the Columbus Horse Sale and listening to Merlin Woodruff and Steve Andrews selling the horses.  They also enjoyed watching Bill Sheridan sell at the local John Henry Yoder Consignment sale.  John Henry started the consignment sale that they currently hold, which is the largest Amish consignment auction in the state of Michigan.  Their company, Yoder Bros. Auctions LLC owns and operates that auction along with Amish handmade quilt auctions in various states, along with farm, government and estate auctions.  Willis attended Reppert School of Auctioneering in 1991 and proceeded into the auction business full time in 1996.

The Super Summer Slam Down was held at the Midwest Auctioneers Roundup on June 13, hosted by the Michigan State Auctioneers Association.  Contestants were allowed two minutes to sell what they brought and every contestant was required to wear a hat. 22 contestants from 5 states competed for the title and prizes. Auctioneers were judged solely on aspects of their bid calling. The top 5 contestants were rewarded; 5th, Scott Vander Kolk from Dorr, Michigan; 4th, Peter Gehres from Lewis Center, Ohio, Tied for 2nd, James Mast from Orrville, Ohio and Wade Leist from Boyne City, Michigan and the Super Summer Slam Down Champion, Willis Yoder from Shipshewana, Indiana.

Willis is also the 1997 Michigan State Auctioneers Association Bid Calling Champion, the 2004 and 2005 Indiana State Reserve Champion, a 2 time finalist in the International Auctioneers Championships, and the 2011 Pennsylvania Dutch Bid Calling Reserve Champion.  He is a past MSAA director, a 2002 graduate of the Certified Auctioneers Institute, and a 2011 Graduate of the Professional Ringman’s Institute.  He has been involved in more than the auction side of the auction business, building cashier trailers and truck toppers.  Currently, in addition to conducting auctions, he supplies several different types of auction podiums to the auction industry.  He loves to hunt, fish, go camping and ride horses.  Willis lives in Shipshewana, Indiana with his wife and children. 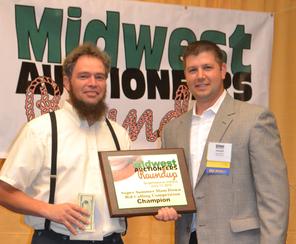