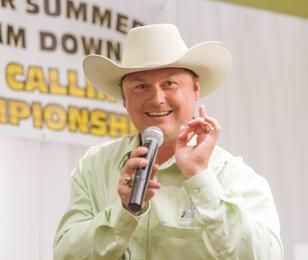 The "Slam Down" differs from other auctioneer competitions because it is all about Bid Calling.  There is no interview and the rules are simple: "sell what you brought in two minutes, and you must wear a hat".  The "Slam Down" is becoming known throughout the Midwest as one of the most challenging and entertaining auctioneer competitions in the world.  Competitors lay it all on the line as they call bids in a manner that is similar to an actual live auction setting.  Many competitors enjoy this type of competition as they are not judged on anything other than how they sound.  Leist becomes the 4th winner of this growing competition.  The previous winners are Willis Yoder (2012), Leroy Yoder (2013) and current International Auctioneer Champion, Peter Gehres (2014).

Wade enjoys and values his membership in the NAA and MAA.  Being a member for 10 years in the MAA has brought him new relationships and business opportunities.  He credits his membership in these professional associations for much of his success as an auctioneer today.  "Being a member of my state and national associations brings me credibility within the industry as an auctioneer.  The education and networking that I receive allows me to be recognized throughout the industry as a trusted professional.  I believe that my association affiliations makes me the preferred auctioneer in our marketplace.” -Wade Leist.

Wade and his wife Sarah live and raise their children in Boyne City, MI.  They currently have 3 daughters (Morgan 10yo, Katie 6yo and Aubrey 16mo) with one more child due in January.  In addition to auctions, they also operate a horse leasing business that leases over 100 horses for summer riding programs.  Wade and his family enjoy camping, motorcycle riding and attending all the various activities the kids are involved in.

Wade works with his dad Frank, brother Ed, and cousin Jerry Schmoldt to form Leist Auctioneers.  Leist Auctioneers specializes in farm, real estate, livestock, and estate auctions. Wade also performs dozens of benefit auctions each year throughout the state.  Non-profit groups throughout the state have come to call on Wade Leist Benefit Auctioneer to ensure success for their fund raising event.  Wade credits the education and experience garnered from auctioneer associations and competitions for giving him the knowledge and ability to perform successful benefit auctions.

Special Thanks to Slam Down Judges:  David Helmer, Bill Houchens, Mike Furlo, Beth Rose and Willis Yoder. For more information on the Midwest Roundup and how to attend next year, visit MidwestAuctioneersRoundup.com or FindMichiganAuctions.com.  Be sure to register and attend the NAA Conference and Show held in Grand Rapids MI in July 2016.