The “Slam Down” differs from other auctioneer competitions because it is all about Bid Calling.  There is no interview and the rules are simple: “sell what you brought in two minutes, and you must wear a hat”.  The “Slam Down” is becoming known throughout the Midwest as one of the most challenging and entertaining auctioneer competitions in the world.  Competitors lay it all on the line as they call bids in a manner that is similar to an actual live auction setting.  Many competitors enjoy this type of competition as they are not judged on anything other than how they sound.

This year’s competition was fierce.  5 Finalists were announced from the field of 28.  The 2016 Finalists were John Beechy (Nappanee, Ind), Justin Croy (Plymouth, Ind), Frank “Ed” Leist (Petoskey, Mich), Jarron Miller (Huntington, Ind) and James “Junior” Staggs (Puryear, Tenn).  The placings were then announced and were as follows:  Justin Croy (5th), Jarron Miller (Tied for 3rd), John Beechy (Tied for 3rd), Frank “Ed” Leist (2nd), and James “Junior” Staggs (Champion).  The top 5 finishers were awarded with trophies and cash prizes.  All of the top 5 finishers were members of the Michigan Auctioneers Association.

Junior is an Auctioneer/Affiliate Real Estate Broker with Doug Taylor Auction Service in Puryear, Tennessee.  Although Junior didn’t grow up around auctions, he caught the “bug” when he worked as a “grunt” for his wife’s uncles firm.  He attended Nashville Auction School in 2007 and was elected to class president.  He has been licensed in real estate for over 4 years.  Junior is also creative.  He is the owner/founder of The Auctioneer Print, a poem written and produced about the Auctioneer.

Junior and his wife, Katie, live on a small farm in Puryear, Tennessee with their two daughters, Savannah Kate and Sophie Beth (both future auctioneers). 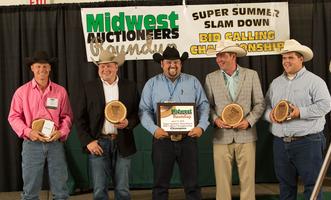